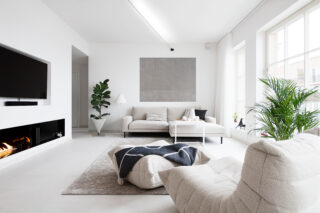 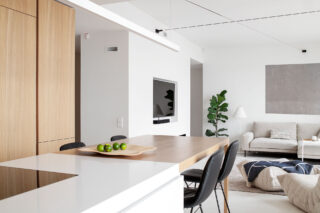 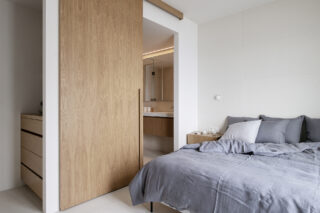 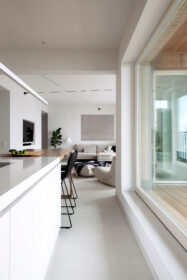 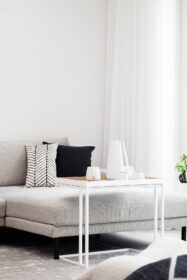 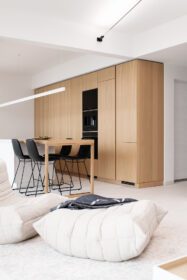 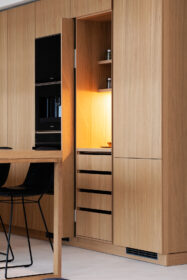 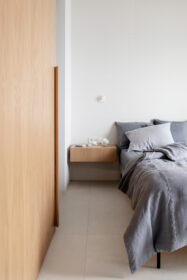 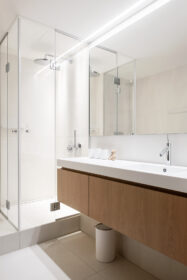 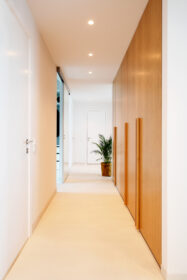 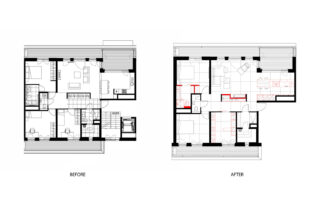 The location of the apartment and the openness to the sea were attractive, but some simple but necessary changes were made by interior architect Aet Piel in the apartment plan to make it a more beautiful, but also significantly a more functional space.
The biggest change in the apartment was the layout of the kitchen – instead of the originally planned small kitchenette, the Aet Piel designed a spacious, island-shaped long and bright worktop providing an opportunity to enjoy the view to the calm sea while busying oneself in the kitchen.
The original dark wooden floor was replaced with white, large-sized ceramic tiles (Gigacer Light), which made the whole apartment visually significantly more spacious. To achieve a more interesting result, the same Gigacer Light ceramic tiles with five different textures were used to cover the bedroom wall. For spotlights, Jung’s new product “Plug and Light,” a false minimalist luminaire that can be rotated 360 degrees and whose light tones can be adjusted from cold to warm, was installed in the same room. The dark, massive partition doors already installed in the apartment were also abandoned, they were replaced with massive white doors using a sliding partition wall. The minimalist material choices used are designed to emphasize the light and sea views.
As an interior design element, the entire apartment’s lighting system plays an initially imperceptible but crucial role. With the help of the so-called intelligent lighting system, which takes into account the human biological rhythm and natural daylight.
One of the smaller rooms in the apartment was redesigned into a so-called walk-in wardrobe, which freed up a lot of space originally planned for storage in the hall, thanks to which it was possible to place an electrically controlled bio fireplace in the living room.